The Effectiveness of an Empty Space 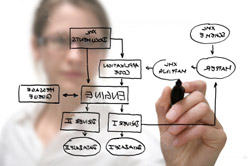 The way most agencies conceptualize banner ads is seriously flawed. The internet is a fundamentally different consumption medium than TV, so wake up!

Amazingly, it appears as if the entire industry has forgotten how consumers interact with advertising. The isolation bubble of mediocrity surrounding agencies and clients has become so pervasive that a thought loop rarely circles most people’s squishy skulls. How did this happen and why? At which point did the process become so removed from the consumers’ interaction with our product that we lost touch with them? The result? The proliferation of banner advertising so removed from the consumer that it’s amazing half these people still have their jobs.

Why does the internet ad banner suck? Well, let me tell you why — then I’ll tell you how to mitigate what’s wrong with it.

How can I bust on the most highly successful form of display advertising and the form that supports almost everyone in this industry outside the search space? It’s simple. The ad banner is the bane of my existence, the thorn in my side, the blinky-blinky dancing mortgage guy of my nightmares.

It’s not the format that’s flawed. Well, scratch that, the format is flawed, but it’s not like there is really anything better to do to accommodate advertising on web pages currently. But I’ll explain that later.

It wasn’t the IAB that screwed up. It wasn’t some technology. It was all of us. (Well, maybe not me.) But it’s all the traditionally minded, storyboarding, “fit a commercial in a banner” thinking creative morons and their clients. I’m not talking about rich media or those formats that allow more immersive experiences. But even there, the creative luddites usually use those formats to just extend their incompetence.

Here is how the process usually goes. If the agency is bad, and the client is stupid, the agency prepares a brief based on client input, ideates on that brief, and then pitches creative ideas based on that brief. It is then reviewed by the client, feedback is given, and maybe, or maybe not, a banner gets created, leading to a whole slew of revisions, changes and approvals. To create what? A friggin’ ad banner.

My issue with that is there are so many problems with the traditional process that has been adapted for online that I almost don’t know where to start eviscerating the idiots who still create banners that way.

First, the way most agencies conceptualize creative for banners is flawed. Most are trying to tell a story in 15 seconds. Why is that flawed? The internet is a fundamentally different consumption medium than TV. TV is interruptive and linear in consumption: content, content, content, commercial content. Banners, by design, are immersed in the chaos of content. If the consumer even notices the banner, it is a second here or there — only snippets of the communication message.

So how do clients review that banner when they approve it? As if it’s the only thing that exists in the world on an empty screen. It’s a fallacy of the entire ideation, production and approval process.

So, what do you do? Stop creating stories. No one reads banners. The point and purpose of any banner must be delivered in three seconds at any point in the banner. Tall order? Sure it is.

What else? Stop reviewing banners in isolation as if that’s what the consumer sees. You need to set up a mock page of a real website and have the client review creative work there, full of content, distractions and all. In fact, create three different types of mock sites. It is not the agency’s job to impress the client with its ad, it’s the agency’s job to deliver real-world interaction with it. Those agencies that do gain the trust of their clients for being able to think beyond their own myopic interests.